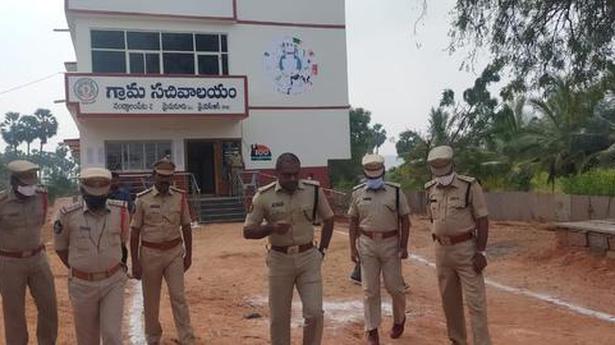 The police department has made tight security arrangements of filing of nominations for the first phase of panchayat elections began in the district on Friday. Flying squads, static surveillance teams have been formed to ensure strict vigil.

Superintendent of Police K.K.N. Anburajan on Friday inspected the village secretariat building at Nandyalampet in Mydukur mandal, which has been modified as the nomination cluster ahead of the polls.

Nine Deputy Superintendents, 16 Inspectors and 25 Sub-Inspectors had been drafted for duty for the nomination phase, while 25 policemen would stand guard at every nomination cluster. Every mandal would be supervised by an official in the cadre of Deputy Superintendent of Police, who would offer instructions to route mobiles, striking force, special striking force personnel.

“Barricades will be erected around and no vehicle will be allowed within a radius of 100 metres from the nomination clusters,”Mr. Anburajan instructed. Special teams had been formed immediately after the code came into effect, he said.

Find mobile-friendly version of articles from the day’s newspaper in one easy-to-read list.

Enjoy reading as many articles as you wish without any limitations.

A select list of articles that match your interests and tastes.

Move smoothly between articles as our pages load instantly.

A one-stop-shop for seeing the latest updates, and managing your preferences.

We brief you on the latest and most important developments, three times a day.

*Our Digital Subscription plans do not currently include the e-paper, crossword and print.

A letter from the Editor