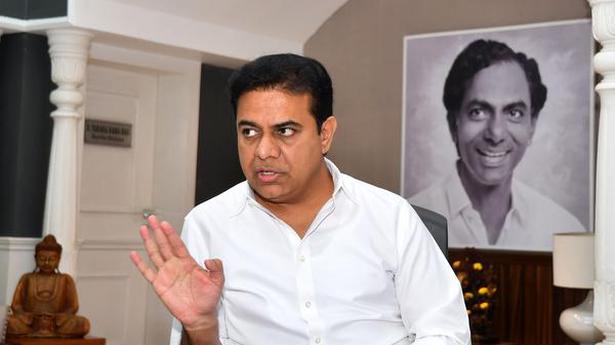 Upcoming ICMR facility in Genome Valley may be strengthened to take up the task, he said in letter to Union Health Minister

Telangana Industries and IT Minister K.T. Rama Rao has highlighted the need to set up a vaccine testing and certification laboratory in Hyderabad on the lines of the Central Drug Laboratory in Kasauli, Himachal Pradesh.

In a letter to Union Minister for Health and Family Welfare Dr. Harsh Vardhan on Wednesday, he said in manufacturing over six billion doses annually and contributing to one-third of the global vaccines output, Hyderabad has come to be known as the ‘Vaccine Capital of the World’. The vaccines are to be sent to the facility in Kasauli for testing and certification.

“The logistics and the time involved in sending the vaccines to the CDL in Kasauli were constraining the industry in being a more effective and competitive destination,” Mr. Rao said.

The Minister said this mentioning that the Indian Council for Medical Research is establishing the country’s largest National Animal Resource facility for biomedical research in Genome Valley, Hyderabad. The State government has provided the required land for the project free of cost to ICMR.

“I am happy to note that this facility already has a mandate of testing and certifying the drug, including vaccines, medical devices and to certify them on behalf of the government of India. I would like to request that the establishment of this facility be expedited and this institution strengthened further to conduct testing and pre-release certification of immuno biologicals meant for human use in India,” Mr. Rao said.

He also sought the setting up of a Government Medical Store Depot (GMSD) facility by the Centre in Hyderabad with state-of-the-art data monitoring and tracking system. Such a facility would go a “long way in supporting the vaccine manufacturing efforts in the country. Currently, such facilities are available in Karnal, Mumbai, Chennai and…