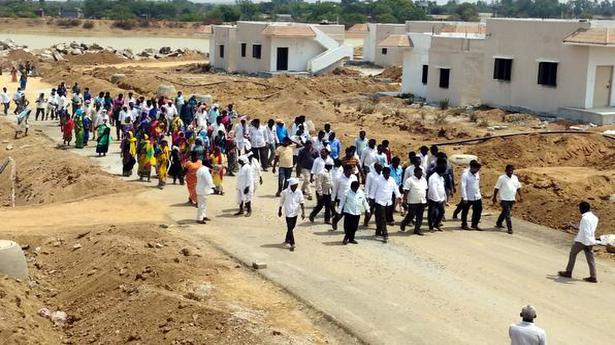 Oustees from different villages that would be submerged by the Mallannasagar reservoir are gradually moving into their future homes.

On Saturday, oustees from Vemulaghat, one of the villages that waged war with the government demanding implementation of Fair Compensation and Transparency in Land Acquisition, Rehabilitation and Resettlement Act-2013 (LA Act 2013), visited the Rehabilitation and Resettlement (R&R) colony being constructed in Mutrajpally on the outskirts of Gajwel Revenue Divisional Headquarters. It was learnt that people from the SC Community visited the colony and examined the houses that would be allotted to them. Works of power and water supply are nearing completion and drainage works are under way.

Siddipet Revenue Divisional Officer (RDO) K. Ananta Reddy accompanied the oustees and showed them the houses that would be allotted to them. The oustees expressed satisfaction over the construction. At the same time, they shared their fears over pending payments referring to the oustees of Erravalli, some of whom are yet to receive compensations.

“The RDO said cheques for the amounts would be handed over to us the moment we vacate the houses. However, we brought up the case of some oustees from Erravalli for whom various compensations are pending. We have made it clear to the officials that we will not vacate our village till all payments are made. The RDO has accepted our demand,” said an oustee from Vemulaghat, adding that the Collector has promised to follow the judgment in the case of single women.

Some single persons from the village approached the High Court seeking compensation while the government has rejected the same those above 65 years.

Budget session of Telangana Legislature to last for 10 days, till...