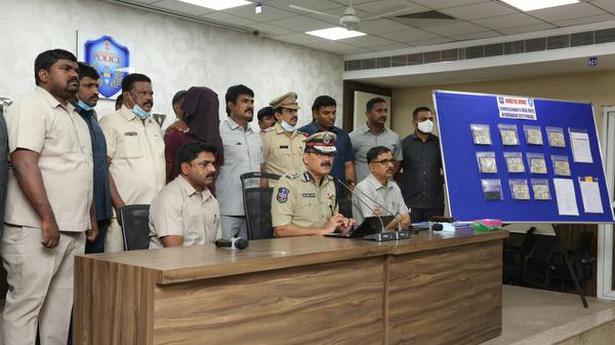 Former Ranji Trophy player of the Andhra Pradesh cricket team was arrested on Saturday for allegedly cheating corporate companies by impersonating as the personal secretary of IT and Industries Minister K.T. Rama Rao.

Budumuru Nagaraju (25) from Andhra Pradesh’s Yavvaripet village in Srikakulam district, was apprehended by the sleuths of Hyderabad Commissioner’s Task Force (North Zone), after he reportedly extorted ₹ 39.22 lakh from nine corporates in the State capital.

Impersonating the IT Minister’s personal secretary Bandari Tirupathi, Nagaraju recently phoned the company heads informing them that Mr. Rao would soon be sworn in as the Chief Minister of Telangana and they have to arrange money for his swearing-in-ceremony which will be held at LB Stadium, the investigators said.

“He demanded money from them (corporates) for erecting hoardings, giving advertisements in print and electronic media, for the swearing-in-ceremony,” Commissioner of Police Anjani Kumar said, adding that Nagaraju was apprehended by the team led by inspector K. Nageswar Rao.

He said that since 2018, the accused was involved in 10 cases in both the Telugu-speaking States of Andhra Pradesh and Telangana, and this year alone nine more cases were booked against him.

“Nagaraju has a habit of targeting corporate companies, hospitals, realtors, and educational institutions, and extort money from them by introducing himself as the Minister’s personal secretary Tirupathi over the calls,” Mr. Kumar said.

An MBA graduate, the 25-year-old represented Andhra Pradesh in Ranji trophy matches between 2014 and 2016.

“Despite releasing on bail, he didn’t change his attitude, and continued to dupe people,” the officer said.