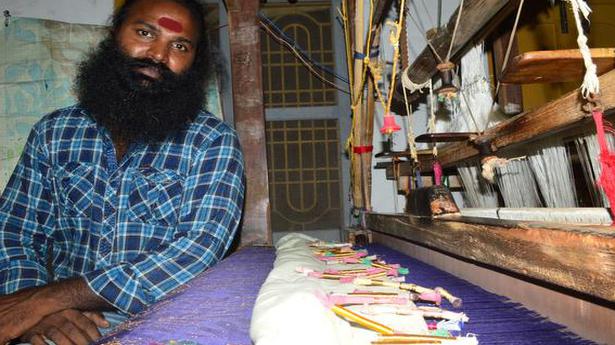 Born to a fisherfolk family in Uppada village in East Godavari district, Ummidi Govind Appayamma has come to be associated with Uppada Jamdani saree.

While a saree is usually known by its design, a Uppada Jamdani saree derives its distinctness from the technique used in weaving it. Here, a weaver first makes a sketch of a motif, also called graphic design, on the saree before it is stitched upon. Also, a motif appears the same way on the front and reverse side of the saree in Uppada Jamdani.

The graph design, a guide for a weaver in this technique, is the base for the pre-weaving stages of a saree and Mr. Govind is famous for having contributed above 3,000 graph designs of motifs for over two decades.

But taking up work in the field of weaving was accidental, Mr. Govind recalls. “As a kid, when I used to visit a house of a weaver, Daivam Srinu, in my street to watch television, the motifs drawn on paper greatly attracted me. Later, Mr. Srinu, who was impressed with my drawing skill, encouraged me to draw more in later days.”

“At 15, I was able to handle the graph design on my own. In my school life, I earned the fame of being the Jamdani graph designer after learning the technical aspects of graph design. I remember that the weavers used to offer me sweets in return of my work,” said Mr. Govind who is still working for Mr. Ganesh as a mark of respect.

Today, he charges ₹3,000 per design. “The graph design of a motif is permanent. The owner preserves it as long as s/he wants it. Of over 3,000 designs which I have drawn, at least 600 designs are my own, inspired from birds, flowers and nature,” explained Mr. Govind.

The 36-year-old’s tryst with weaving has made him so famous that every weaver in Uppada preserves his work.

“Fishing is my family occupation but I share a special bond with the art of weaving. I became a man of two occupations – weaving and fishing. The occupational diversity of my village gave me such opportunity to explore the both…

Anantapur gets SKOCH award – The Hindu