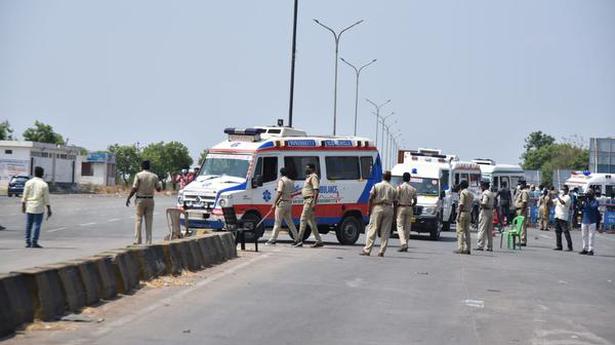 Telangana High Court on Friday directed the Telangana government not to stop ambulances of other States ferrying COVID-19 patients from entering Telangana for medical treatment.

The order should be communicated to the police officers who were stopping ambulances at the State borders immediately, the HC said. The order was passed by a bench of Chief Justice Hima Kohli and Justice B. Vijaysen Reddy, after hearing a PIL petition.

The petitioner moved a House motion challenging Telangana government’s recently issued guidelines on COVID-19 patients being brought from other States to Hyderabad for medical assistance. The bench issued notices to State government and directed it to file counter affidavit within two weeks.

While directing Telangana government not to stop ambulances coming from neighbouring States, the bench made clear that it “should not adopt any circuitous way of issuing fresh guidelines, circular or order putting pedals on inter-State travel of ambulances carrying COVID-19 patients”.

The authorities should not insist with the patients or their attendants coming from other States to apply in a prescribed format to the Control Room (which was set up to tie-up with any hospital in Telangana for COVID-19 patient admission). The bench also clarified that in case if a patient or attendant on his or her own applies to the said Control Room, the officers manning the latter can assist them in securing hospital admission.

The Bench clarified that there was no requirement of any authorisation from the control room for an ambulance carrying a COVID-19 patient seeking hospital admission in Telangana. While issuing the directions, the bench noted that Supreme Court had recently passed an order in a PIL plea taken up suo moto with specific reference to hospital admissions.

The Union government too released a government order complying with the apex court directions. The bench also recalled its earlier directions, while hearing a batch of PIL pleas on…

KTR comes out in support of Malayali nurses working in Delhi

Centre not given credit by Telangana govt for 2BHK: Bandi Sanjay...