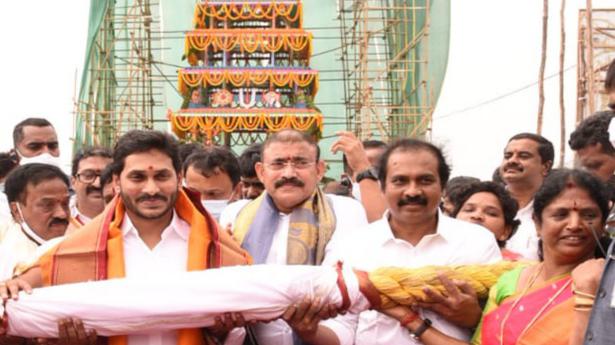 The Chief Minister has offered special puja to the deity and inquired about the rituals scheduled to be performed during the annual Kalyanotsav.

Chief Minister Y.S. Jaganmohan Reddy on Friday inaugurated the 40-foot height new wooden chariot of Sri Lakshmi Narasimha Swami temple by pulling it on the temple campus here in East Godavari district. With this, the ten-day annual Kalyanotsav has commenced at the temple.

The new chariot will be used in the Radhotsavam on February 23 as part of the annual Kalyanotsav, during which a procession of the standing deities will be taken out in the streets of Antarvedi village on the chariot.

The villagers are seen delighted to witness the new chariot that was built in a record time after the century-old chariot was gutted in a fire accident on the fateful winter morning in September, 2020.

The State government had spent ₹90 lakh to build the new chariot with 1250 cubic feet of teak wood grown in the Bastar forest cover in Chhattisgarh State. The making of the new chariot began in September and completed by January.

The Chief Minister has offered special puja to the deity and inquired about the rituals scheduled to be performed during the annual Kalyanotsav.

The old chariot is being kept on the temple campus by covering it with covers, restricting movements of devotees close to it. The State police are guarding the remanants of the old chariot round the clock.

LED bulbs to be distributed from February in Krishna district